Class 2 Take Us to the Rainforest!

Bosbury School was treated to a real South American adventure on the first Friday back after half term, as Class 2 took us on a magical journey to the rainforest through the use of special BBC wildlife footage to give us a glimpse of the many varied animals they have been looking at as part of a fascinating class topic which has really enthralled them! 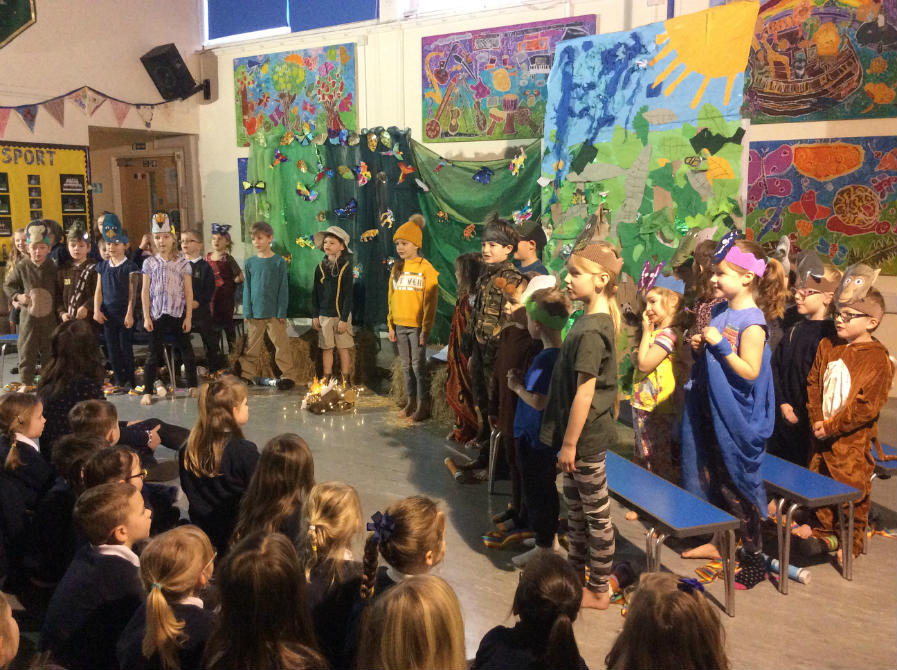 Bosbury's very own Michaela Strachan, Chris Packham and Simon King displayed expert presenting skills in front of another packed-out school hall of children and parents (well done in particular to the young lady in yellow who showed tremendous bravery in learning her own lines as well as those of her co-presenter Kate Humble who was sadly poorly that day), sitting around a very cosy-looking log fire as they explained how secret cameras had been placed in the dense woodland undergrowth to allow us to look at all kinds of wonderful creatures in their natural habitat. 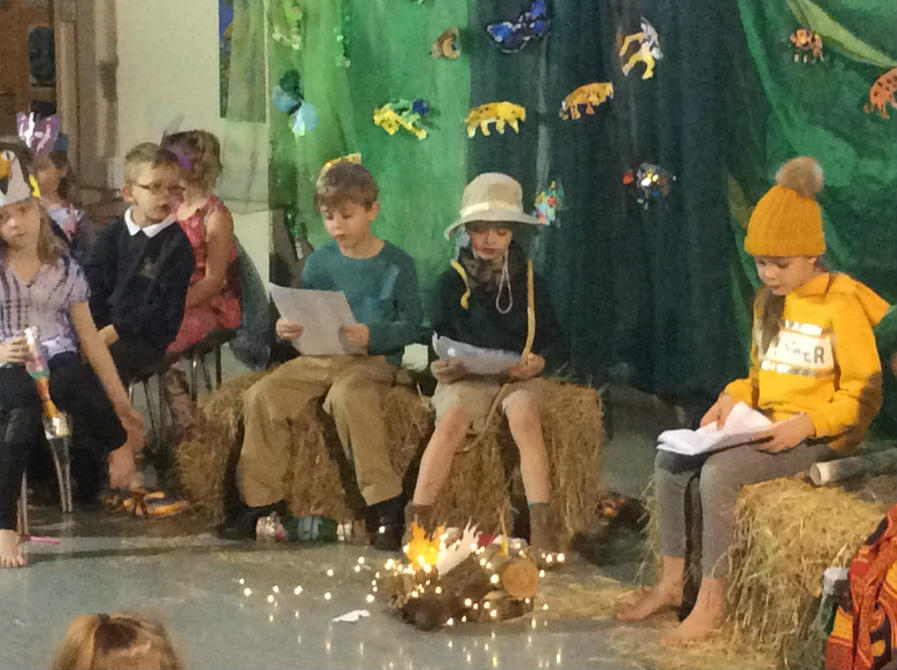 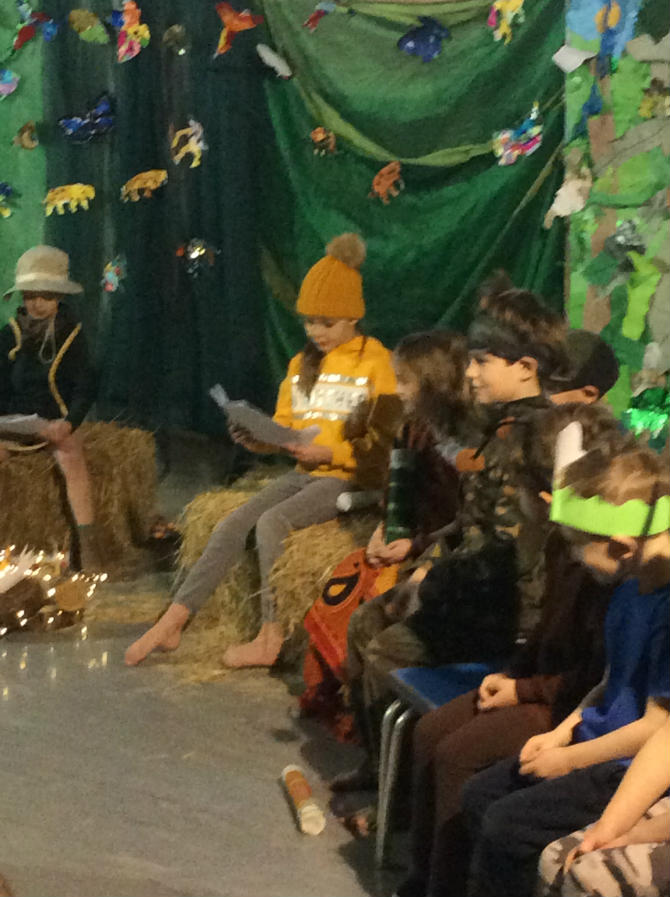 These amazing animals then turned out to be even more amazing than we had previously thought, as they could actually talk - in fluent English no less! First we were greeted by a group of reptiles who explained how snakes and other lizards survived in the jungle environment, before another group of animals then stood in front of the lens and talked all about what was undoubtedly Class 2's favourite rainforest resident - the sloth! As the lackadaisical mammal was keen to point out however in a very audible manner, he was most definitely NOT lazy... despite appearing to spend most of the day hanging upside from trees fast asleep! 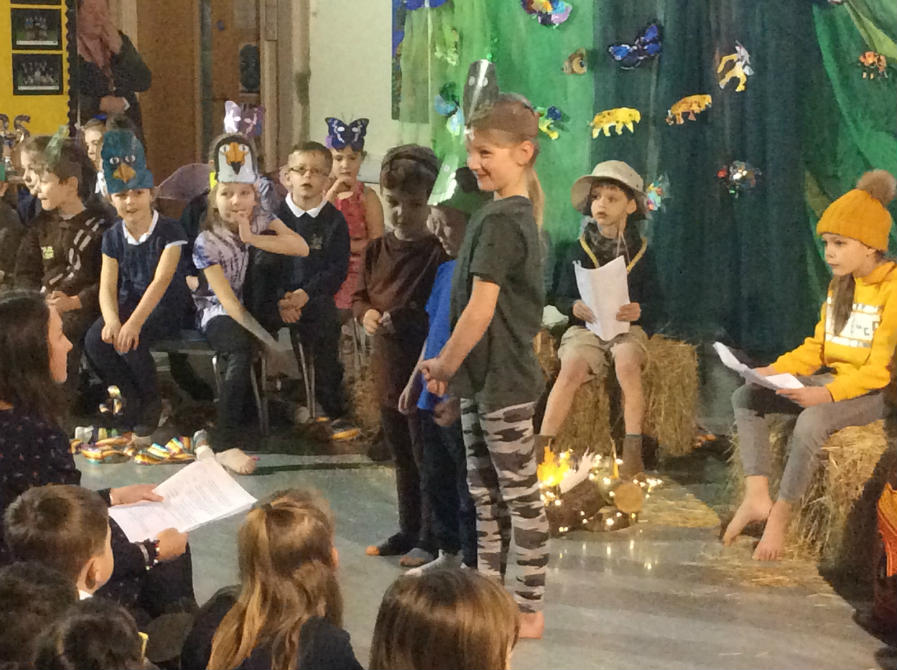 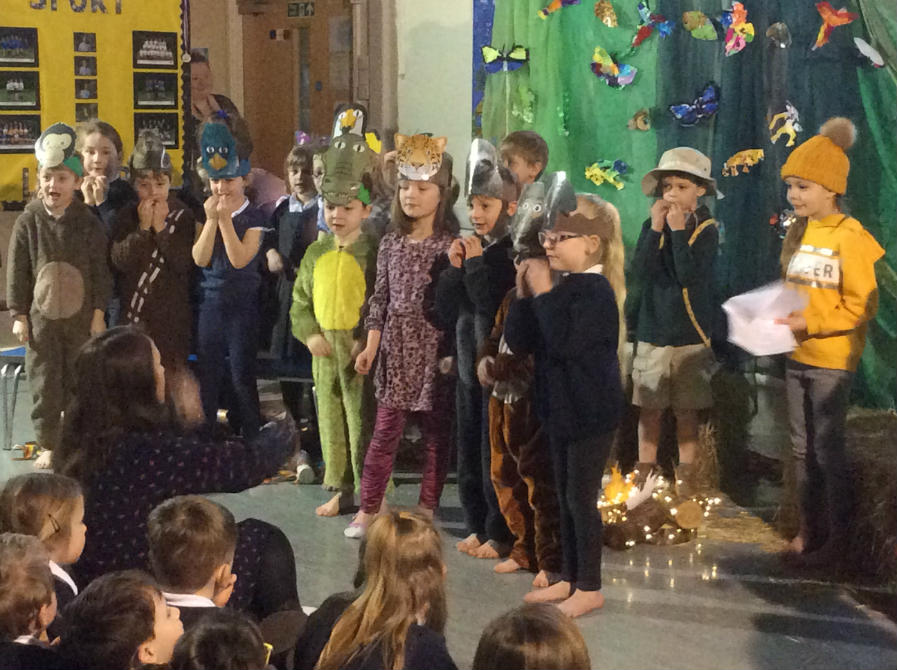 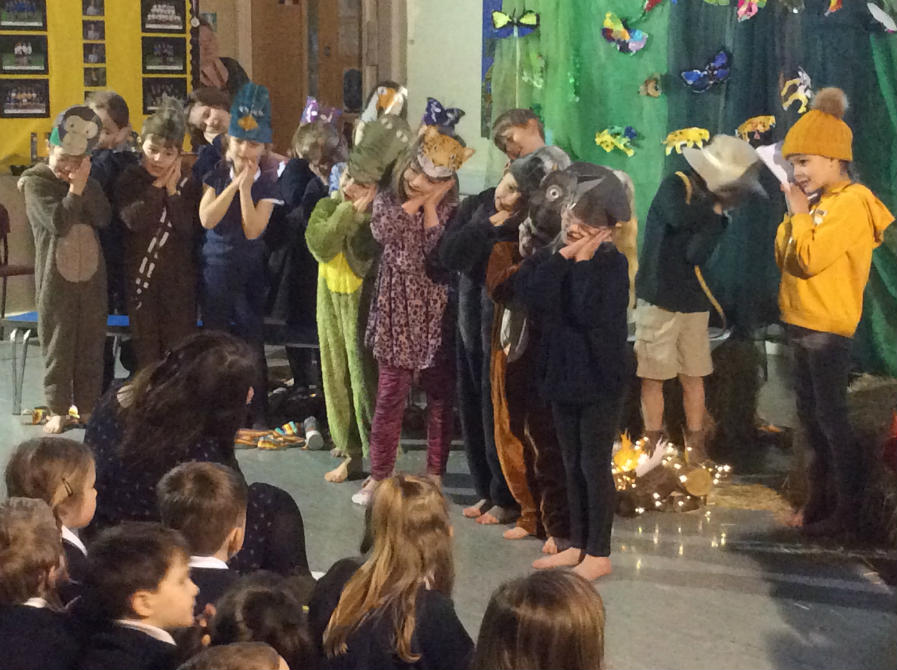 After a friendly group of monkeys pleasantly informed us that capybaras eat their own poo (cue much predictable laughter from the younger members of the audience!), we met some of the human inhabitants of the forest who lived in tribes before it was time for a song taking us around the continents of the world in a superb display of geography! 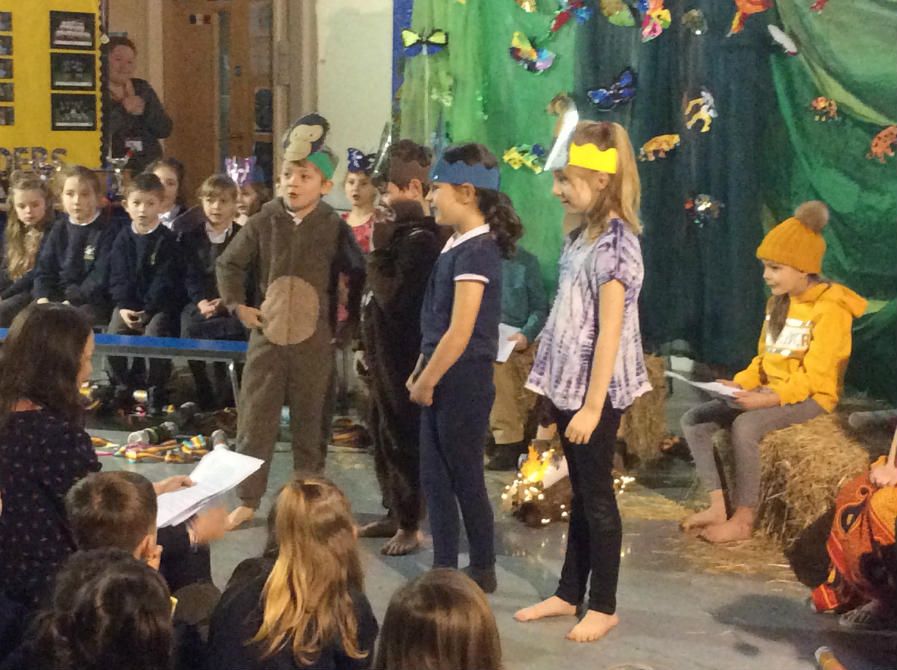 We were then treated to a lovely authentic rainforest instrumental piece, with these very talented animals showing such impressive levels of skill with their rainshakers that Mrs. Walker is currently thinking of heading an expedition into the Amazon to add to her visit to Rwanda to recruit some of these mammals and reptiles for future church services! 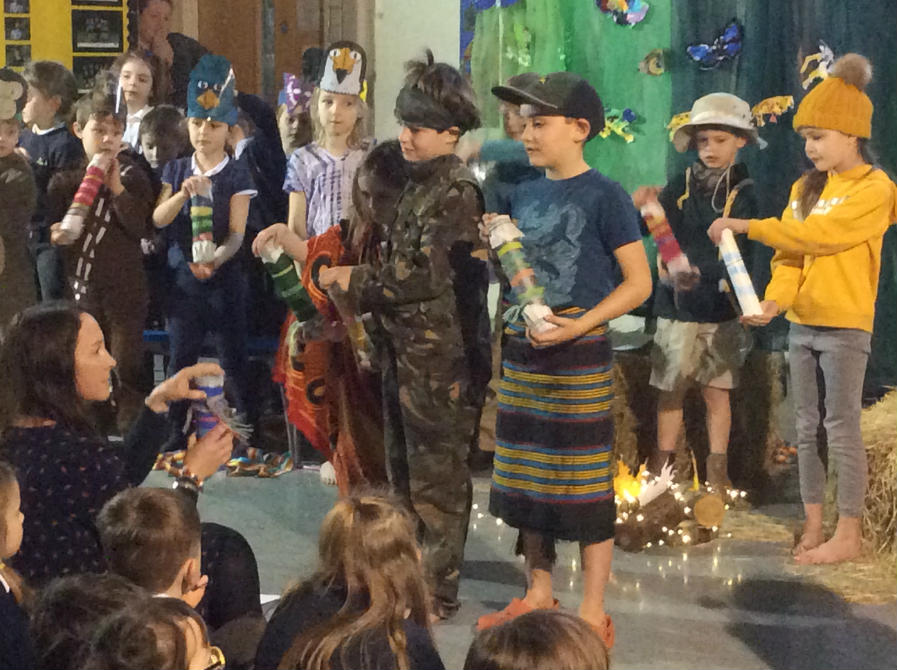 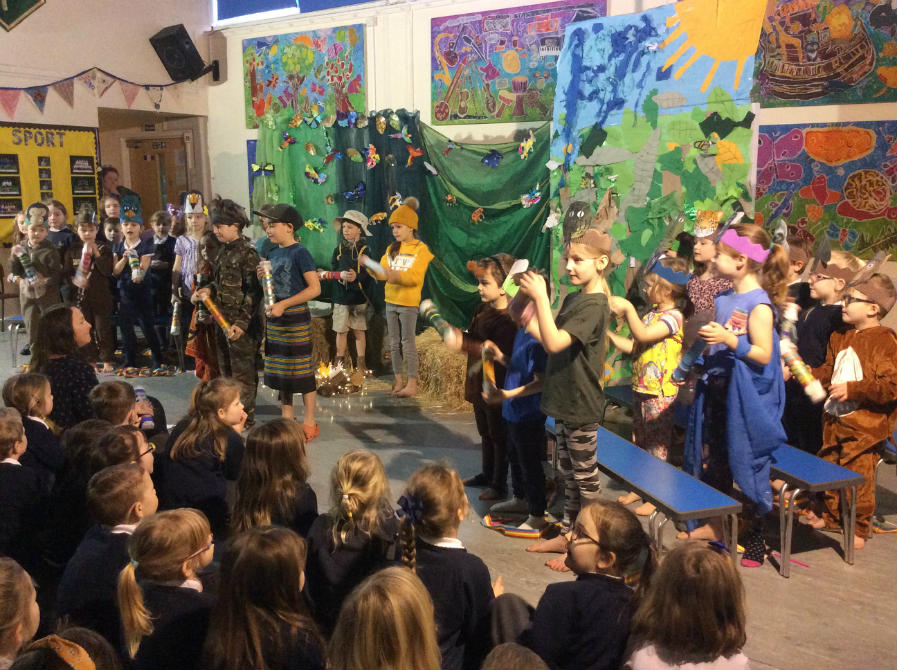 Some beautiful rainforest butterflies then made some very graceful swoops around the stage, before the class swirled their rainbow ribbons to a moving rendition of Louis Armstrong's classic song, What a Wonderful World. Yes, there were more than a few moist eyes amongst parents during what was quite an emotional performance! 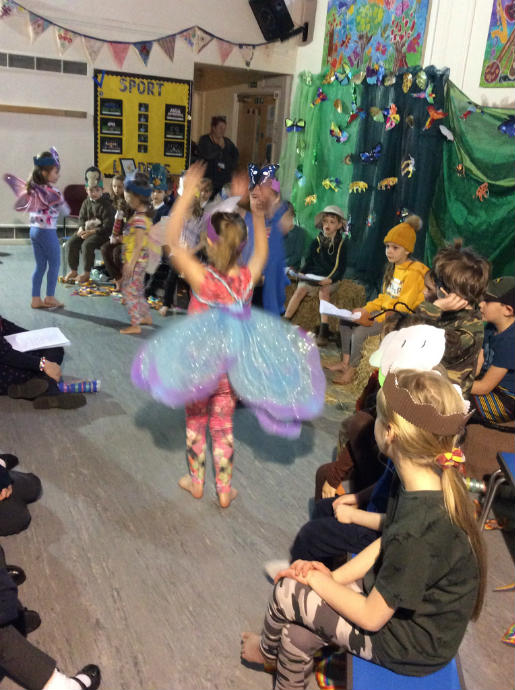 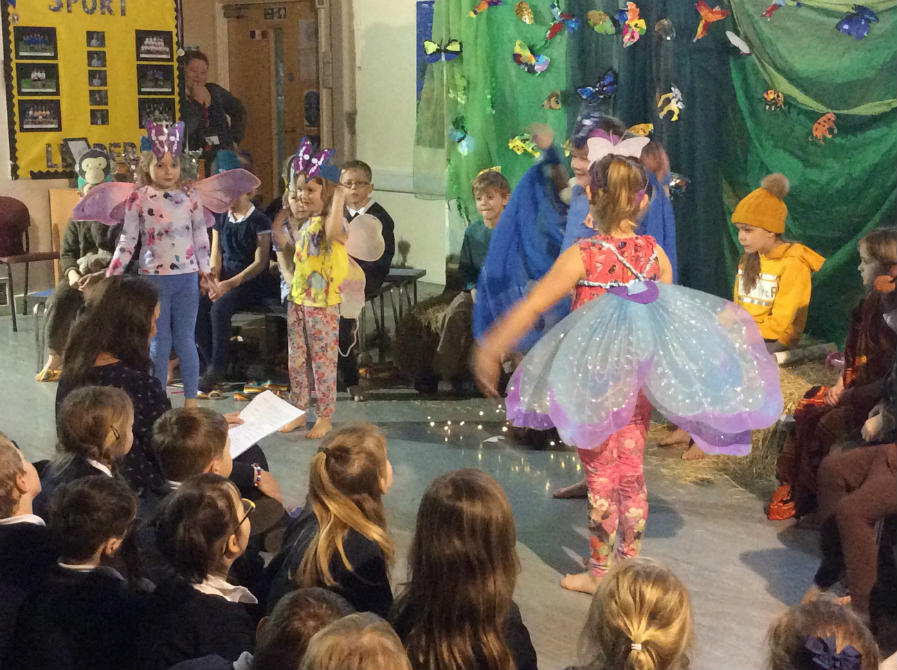 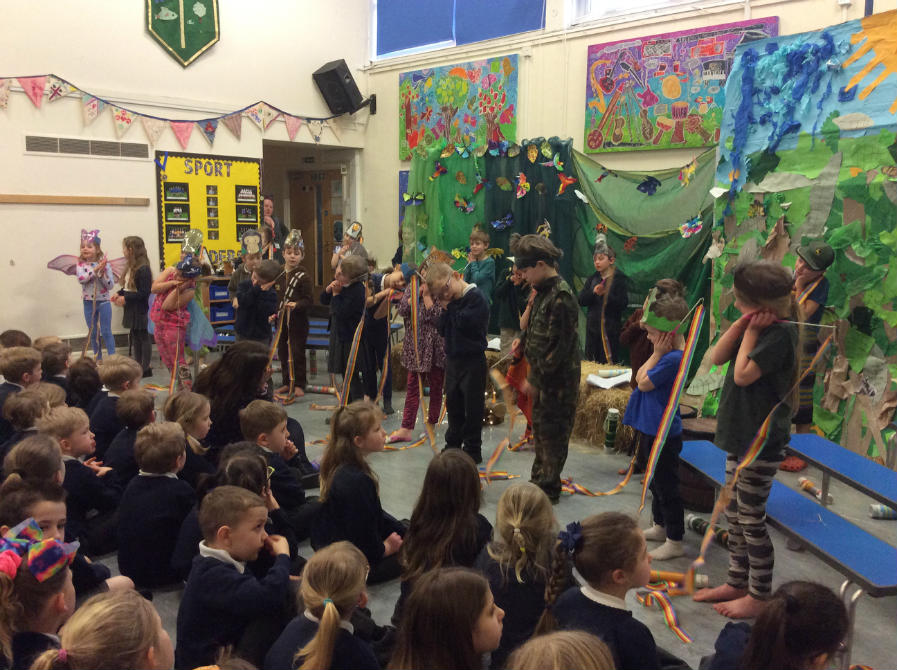 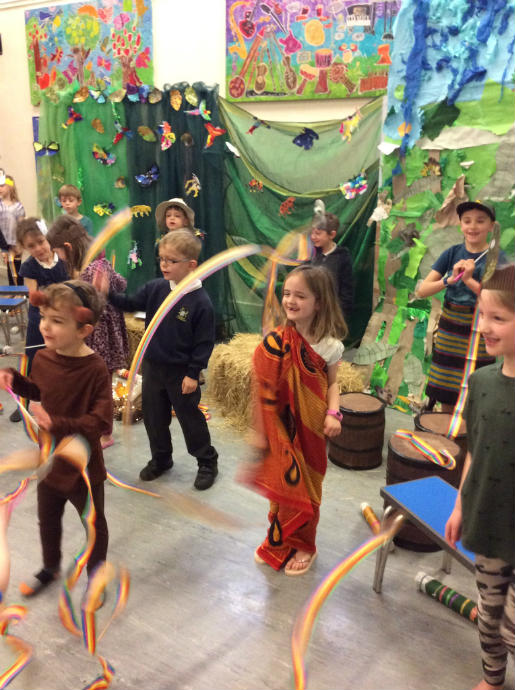 Well done to all of Class 2 on such a confident, beautiful and very colourful assembly (just look at the amazing rainforest display work on show in the background which was produced by the children this half term!), and of course to Mrs. Dark, Miss Cooke and Mrs. Swain for all of their hard work behind the scenes in making such an enjoyable performance possible. More photos from this tropical assembly can be found under the 'Gallery' section of the website HERE!

Only one assembly now remains to round off this year's fantastic class assembly season. I wonder what Class 1 will treat us to next week for the grand finale...? 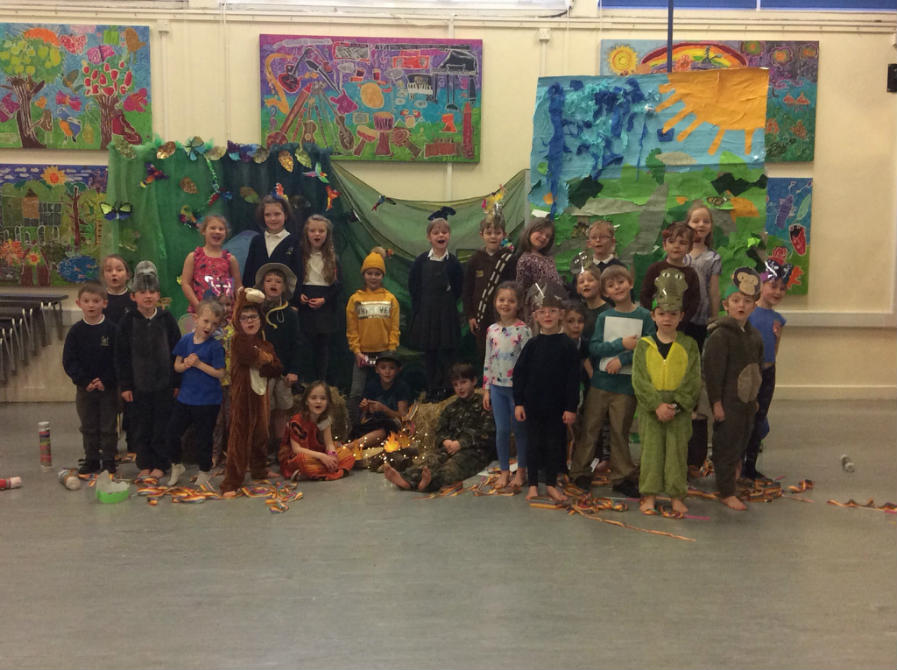 The colours of the rainbow, so pretty in the sky, also on the faces of people going by.
I see friends shaking hands, saying how do you do, they're only saying... I love you! :-)